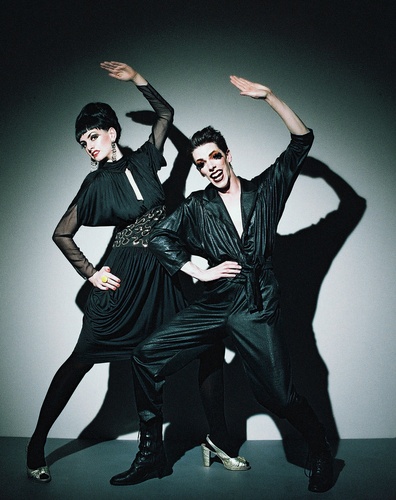 When everyone is dancing strictly or being a snowflake, neo-cabaret sensations Bourgeois and Maurice make their debut in the Lilian Baylis Studio with their brand new show Can’t Dance. Their follow-up to the Edinburgh Festival show Social Work has been received well:

**** “Bourgeois & Maurice are 21st century cabaret stars like no other. Go now” – TIME OUT

A musical duo with style as sharp as their wit, Bourgeois and Maurice have racked up an impressive host of performances at the Royal Opera House, Queen Elizabeth Hall, the Royal Academy of Arts, the Edinburgh Fringe and a sell-out run at Soho Theatre.

With the nation in the grip of television-fuelled dance fever, the duo have been left with no choice but to show the world just how spectacularly well they Can’t Dance. Mixing laugh-out-loud original songs, film projection and an abundance of astonishing outfits, this brand new show is at once outrageously bizarre and unexpectedly human.

With comparisons ranging from Leigh Bowery to Liza Minnelli and Flight of the Concords, Bourgeois and Maurice demand to be seen. This is the perfect alternative Christmas show for those who are old enough to know better.