The most theatrical event in London recently wasn’t in a theatre — it was in a restaurant. The Ivy, in Covent Garden, is the work cafeteria for the stars, producers, directors and playwrights of London and the world. Here, among the polished wood, white napery and classic stained glass windows that shut out the noise and bustle of theatreland, is where we gather, whether for a glass of champagne before the play, a light supper afterwards, a tête-à-tête, a business lunch, or just a relaxed dinner with friends. The Ivy has been synonymous with the theatre since 1929, when a corner café with linoleum on the floor and paper napkins on the tables was transformed by a genius restaurateur, Mario Galatti, into a refuge for actors and others who practiced the theatrical and political arts. Noël Coward was an early regular, as was Winston Churchill, the Prince of Wales and any American actor visiting London, from the Barrymores to the Fairbankses. It is still where everybody comes to celebrate their opening night, including Bolshoi stars laden with flowers from the Opera House around the corner. Everywhere actors make the rounds of the tables to greet their friends. The paparazzi are outside, kept in check by a doorman who knows the names and preferences of every regular and who seems to be able to summon cabs and limos simply by looking sternly at the street corner. Nobody knows how he does it. 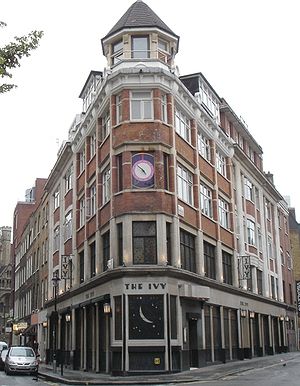 The Ivy flourished until the 1960s, and though it closed at the end of Mario’s reign, its mythology and glamour lived on. Then, exactly 20 years ago, it was rejuvenated by two young restaurateurs. It opened in a perfect re-creation of its original glory, down to the stained glass windows — and it was just as good, only better. I speak with some authority about this because I have been an Ivy regular since I was ten years old, when I was taken every Saturday by my only rich auntie before the matinee of whatever the hit show was that week. I was invariably the only child in the dining room, but that didn’t stop the waiters from treating me, always, as a big star. I thought all restaurants were like The Ivy, and only when it closed did I realize how special it was and how unspecial I was. For me, it has always been that irresistible combination of home and the most glamorous place on earth.

via A LETTER FROM LONDON: Celebrating The Ivy, the West End’s Beloved Eatery – Playbill.com

Graham Spicer is a writer, director and photographer in Milan, blogging (under the name ‘Gramilano’) about dance, opera, music and photography for people “who are a bit like me and like some of the things I like”. He was a regular columnist for Opera Now magazine and wrote for the BBC until transferring to Italy.

His scribblings have appeared in various publications from Woman’s Weekly to Gay Times, and he wrote the ‘Danza in Italia’ column for Dancing Times magazine.