You are here: Home / art / The new Michael Jackson statue gets the critics’ verdict: “a spectacular piece of kitsch” 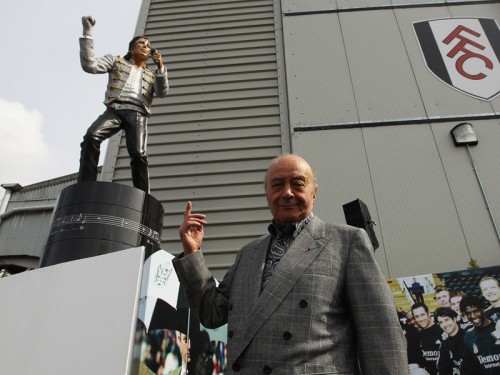 As I predicted yesterday the art critics have started weighing in on Mohamed Al Fayed’s Michael Jackson statue.

The thing is, it’s a spectacular piece of kitsch. But, as Jeff Koons has proved, in certain contexts puppy dogs and, in fact, images of Michael Jackson can become multi-million selling artworks.

But it’s all a matter of context – that ‘s the thing. One person’s kitsch is another person’s art work, but this is just quite creepy and nasty.

I don’t know what it’s made of but it’s basically a blown-up, vaguely look-a-like doll. I’m sure you’ll be able to get a version of one in Toys R Us very soon.

It certainly looks as if his plasticky limbs were too stiff to co-ordinate properly so he’s doing a bit of a constipated, Metal Mickey dance.

When I first saw it, it made me laugh. But I expected it to look exactly as it does because, obviously, Mr Al Fayed is a man of great taste and minimalist restraint.

However, I have a strong feeling that Michael would have simply loved it.