You are here: Home / design / William Kentridge’s animations are the true stars of The Magic Flute at Milan’s La Scala

Last night Die Zauberflöte bowed out from the La Scala’s stage, though it won’t be away for long I’d guess. With this production the theatre has united audience, critics and even the infamous boo-ers from the gallery in praise both musically and theatrically, a rare event.

Although the casting was sound (with a fiendishly accurate Albina Shagimuratova as the Queen of the Night) the evening was stolen from them by William Kentridge’s concept, above all his animations which zig-zagged across his sets. A human-sized singer stands little chance of competing with such vigorous designs flashing about the stage. At any given time 90% of the audience were ignoring the singers on a visual level, which is unfortunate because the Three Ladies (Aga Mikolaj, Heike Grötzinger and Maria Radner) and Papageno (Alex Esposito) were excellent.

William Kentridge is a South African artist best known for his animated films. These are constructed by filming a drawing, making erasures and changes, and filming it again. He continues this process meticulously, giving each change to the drawing a quarter of a second to two seconds’ screen time. A single drawing will be altered and filmed this way until the end of a scene. These drawings are later displayed along with the films as finished pieces of art. These scratchy little designs then quiver with life as they are projected as white light across the black and white set, often swirling dramatically over the entire visible area. The projections came from the Royal Box in the centre of the theatre, from two positions left and right of the prompt box, and from behind the backdrops also giving the opportunity to use actors in shadow-play.

The use of these effects is witty and impressive. Woodblock temples are animated and zoom us in and out of scenes as in a movie. As Papageno vainly waits for Papagena to appear a scaffold and a hangman’s noose are slowly drawn in light during his “eins, vei, drei”, and his friendly birds morph in to vultures. During the Queen of the Night’s arias constellations whirr around her, and during the trials Pamino and Pamina are engulfed in white-hot flames and whitewater rapids. Even if the result is sometimes overpowering for the singers, it is worth it for the emotional punch it gives the story.

In the early 1980s, Kentridge studied mime and theatre at the L’École Internationale de Théâtre Jacques Lecoq in Paris. He originally hoped to become an actor, but he reflected later: “I was fortunate to discover at a theatre school that I was so bad an actor [… that] I was reduced to an artist, and I made my peace with it.”. Here he has found the perfect vehicle for his dual passions. 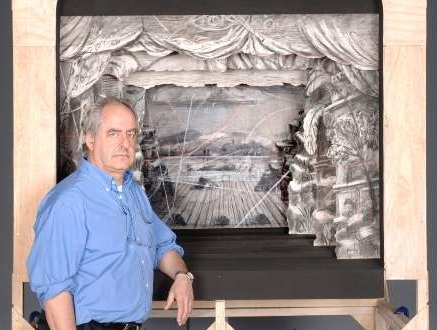