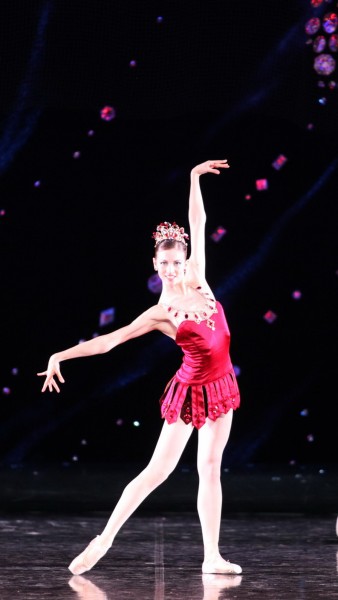 In less than a fortnight the La Scala company has turned out its jewel-box and polished each precious stone. The shambled mess that was meant to be Balanchine’s choreography has become precise, witty and, mainly, as Balanchine probably would have wanted it.

The La Scala ballet company has everything a large scale company could wish for, except performance dates. It presents only five programmes during the current season with 50 performances at La Scala and a handful of tour dates. New York City Ballet are giving 42 performances in its current six-week spring season alone!

The La Scala company also suffers from a lack of stage rehearsal time which is crucial for a technically demanding evening of Balanchine. So the final rehearsals have effectively been in front of the paying customers during the first few performances. With the arrival of Polina Semionova last night everything came together.

Semionova danced Diamonds with great assurance, tossing off the long, sustained pas de deux as though it was the easiest thing in the world. Guillaume Coté, who was slated to start his performances last night too, got a head start: he has been replacing Roberto Bolle who has a foot injury. Coté is an assured and precise dancer, and gleamed more than he did on the first night. Apart from a couple of weak soloists, the company – impressively coordinated in the final crescendo to Diamonds – deserved more applause than it got from the largely touristy audience.

The surprise of the evening was Sofia Rosolini in Rubies. Now she really sparkled. Radiant and confident, this tall dancer of elegant proportions is not even in the corps, she is an “aggiunto” or added dancer. After this performance she deserves something more lasting.