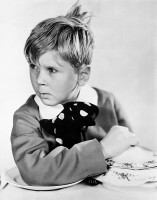 Jackie Cooper, the impish child actor of “Skippy” and “Our Gang” fame who captured the hearts of Americans and went on to a successful television career as an adult, died Tuesday. He was 88.

At 9 years old, the freckle-faced Jackie became the youngest person in history to receive a best actor Academy Award nomination for his work as the playfully disobedient boy with well-combed hair in “Skippy” (1931). Before that, he was a star of “Our Gang,” the wildly popular series of short films about neighbourhood children that was followed by kids for generations.

An advocate for the rights of child actors, Mr. Cooper testified in the “Twilight Zone” trial over the deaths of two child actors in 1982. “He always thought it wasn’t the way to raise kids,” said Cooper III, who resides in San Rafael. “His studio, MGM, tried to sign me once, and he got on the phone with my mom and said, ‘Don’t let them do it.’ ”

Unlike almost all his young co-stars of the day, Mr. Cooper transitioned effortlessly into adult work in front and behind the cameras, earning directing Emmys for “MASH” and “The White Shadow.”