You are here: Home / dance / Jacques d’Amboise to receive Lifetime Achievement Award at the Astaires 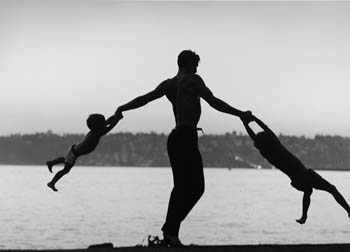 Bebe Neuwirth and Lee Roy Reams will host the 2011 Fred & Adele Astaire Awards, honoring excellence in dance on Broadway and in film, which will be presented May 15 at the Skirball Center for the Performing Arts.

Nominations were announced April 27. Broadway’s Catch Me If You Can led with six nominations. Other shows recognized include The Book of Mormon, War Horse, Wonderland, The Scottsboro Boys and Bloody Bloody Andrew Jackson.

The Astaire Awards were established with the cooperation of Fred Astaire to honor him and his sister, Adele, who starred with her brother in ten Broadway musicals between 1917 and 1931.

Photo: “Jacques D’Amboise Playing with his Sons” by John Dominis, Seattle, Washington, 1962. Christopher d’Amboise will be attending the ceremony.