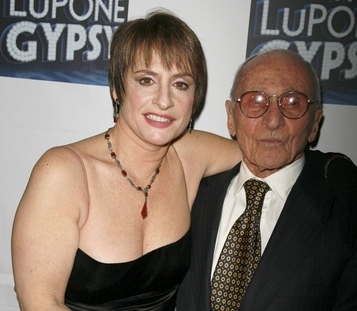 Playbill’s Kenneth Jonesand Adam Hetrick have complied a list of some of the tributes to Arthur Laurents – here are some:

Arthur always told you what he thought, whether you wanted to hear it or not. This made being his friend challenging. When Arthur liked something, which was not often, his praise was genuine, generous and loud.”

The entire cast of Gypsy and I were very lucky to have the opportunity to work with Arthur and experience his passion and love of the theatre. We were awed by his energy and grateful for all the knowledge and insight we gained from him. An era has passed.”

Arthur Laurents was a true American original. Brilliant, frightened, fierce and determined, he recreated the world around him to make himself comfortable. As his works attest, he captured human behavior with laser accuracy. Cruel and loving and funny he was a singular friend.”

Arthur was dynamic, exacting, demanding and generous. He scared the pants off the Gypsy company on day one, and by day two-and-a-half, everyone in that rehearsal room was in love with him.”

Freddie Gershon, a longtime friend and the CEO of Music Theatre International:

He had a disdain of phonies and an ability to out-Machiavelli the most manipulative of stars, producers and studio executives. His economy of words cut to the chase in plays, musicals, and in life. He could be brutal, venomous and unforgiving if necessary and nurturing, seductive and compassionate when necessary.”

Photo: Arthur Laurents with his favourite Rose (“I shouldn’t have said I like Patti best because they’ll get pissed off. But I do.”)