You are here: Home/ dance/ Tamara Rojo interview: “I start from zero – I go back to the steps to find all the feelings again”
Share
Tweet
Pin
Share
WhatsApp 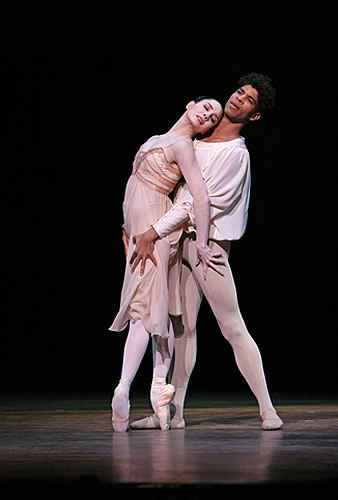 Five minutes in the company of Tamara Rojo and you don’t just want to interview her: you want her to be your best friend. Funny, clever, phenomenally articulate, she responds to each question with excitement, wit, fury and intelligence – and so begins The Telegraph‘s long interview with the Royal Ballet star.

Rojo on returning to a role:

I start from zero. I don’t have baggage from the last time. I go back to the steps to find all the feelings again. There are some ballets I find it difficult to believe in eventually – Nutcracker, for instance – but somehow Juliet is so huge, so flexible, has so much breathing space that you can develop within it.’

Juliet is the driving force from the beginning. She sets all the rules in the relationship: when he can kiss her; where he can kiss her. She pusheshim into commitment.’

On the film Black Swan:

I think it was a terrible film, full stop. The story is terrible, the script is terrible, the characters were all caricatures. I have a big problem with actors who pretend to be a dancer and then get the dancers to do the work for them. They wanted to make it look like Natalie Portman had done the work so that they could force the Oscar – and it worked, but it was lying, it was immoral. ’

By the time I finish a show I’m ravenous but I can’t dance with a full stomach. I eat lots of little snacks through the day: some fruit, a little salmon. You can’t have a full plate of food like the boys do. I was in the canteen next to Sergei [Polunin] the other day. He had steak, fries, salad, bread, cake, everything. I had a pear and a boiled egg.’

I go because I like to be inspired and we are in the best city for it. I go a lot to the Donmar, to the National. I just saw Frankenstein, which was amazing. I always want to know what’s going on, to understand other art forms, to see what lighting is used, to see what kind of use you can get from a set. I’ve been preparing for what I want to do eventually.’

And what does she want to do eventually? Direct a company. The Royal Ballet’s top spot will soon be up for grabs, but at 36 she thinks it is too early, but she will be ready when the time is right:

The fact I’ve had such a good international career has given me a good perspective. The worst thing a director can be is indecisive, not have a vision. A director mustn’t be lukewarm. They have to have a passion for what they’re doing and be able to inspire passion around them.’

But let’s hope she continues dancing a little while longer, sharing the technical and emotional thrills that are the trademarks of her dancing, and then, surely, she will make a fine company director.

Rojo will be dancing Juliet in the Royal Ballet production of Romeo and Juliet at the O2 Arena.
Performances run from 17 to 19 June.