You are here: Home / music & opera / The opera couple of the moment, Anna Netrebko and Erwin Schrott talk about love, life and food. 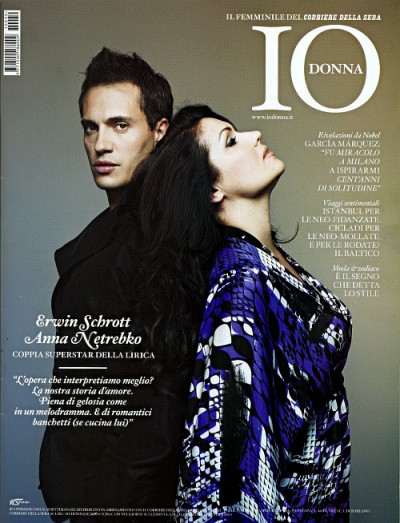 You’ve revolutionized the image and idea of opera. What’s changing?

Erwin Schrott. We are not that important… though if it’s true, it is good for opera too. Opera must compete with football and cinema to stay alive.

I understand that in Vienna, where you live, you’re the new Brad Pitt and Angelina Jolie…

Anna Netrebko. In Austria, as in Germany, there is a great music culture and we have a big following. But we never sell ourselves as a couple. We met when we were both already grown-up and famous.

Now you choose not to work together in important productions, but in the past it was a stage encounter which started it all. Can you tell us about that first meeting?

E.S. It was in 2004 at the Royal Opera House in London with Mozart’s Don Giovanni. I was the Don and she was Donna Anna. I felt a special energy instantly.
A.N. On stage I saw only him; his carisma…
E.S. …but we were both already taken. I was married with the mother of my first daughter Yara, now 13, and lived with them near Milan. But Anna and I stayed friends, and met every now and then for a Don Giovanni. 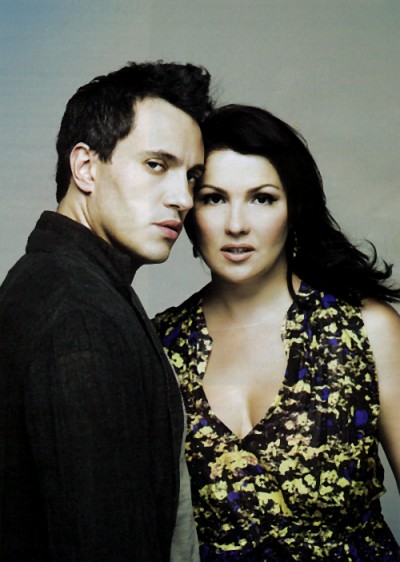 The stage romance started before the real life one. What made the two come together?

E.S.It was once we were both newly single…
A.N. I could feel that he was a very strong man, and it’s not often that you encounter men like that.

A love between Russia and Uruguay – how do you keep hot and cold together?

A.N. No. We are both very hot!
E.S. There’s less distance than one might think: Russians and South Americans are vitally alive inside. And then Anna is the most beautiful creature you could possibily meet. Isn’t that true, mi amor?
A.N. How you exaggerate! Here’s a difference: he showers me in compliments, we Russians aren’t used to it (she blows him a kiss, one of many during the interview).

Russian, English, Spanish… Which language do you speak at home?

E.S. Our language is English. With a little Russian and a little Spanish.
A.N. With Tiago I speak Russian and he speaks Spanish.

And in romantic moments? An area where you’re in charge Erwin? You know all these Don Giovannis and Figaros come with a seducers reputation…

E.S. Everything I do, I do with passion. I’m an angel, but I can become a devil sometimes… I don’t seduce everyone though. I focus on the person I love. I also remain friends with all my women. My first wife, who’s now returned to Montevideo, is part of the family.

We won’t ask you about your catalogue, like Don Giovanni! You relationship must have its complications though. You travel a lot… What is the silliest thing you’ve done to be together?

E.S. An eight-hour journey just to spend two hours with her in Baden Baden.
A.N. Every day there’s something. Yesterday we left the house and went to the supermarket to get things for a picnic on the Seine; we love simple things basically.

You live in Vienna and New York, but what do you call home?

A.N. Nothing, we are very different.

E.S. Yes, we are both jealous! When we’re apart we telephone each other all the time. I find it a little easier to be by myself. But we have a pact: we don’t accept contracts that keep us in different continents.

You are proof that vocal power doesn’t require fat bodies. Anna, I’d define you as an Audrey Hepburn with a voice, which is what Callas wished to be…

A.N. No, no, I’m the opposite of Callas. She wanted to become a Hepburn, after having been plump. 15 years ago I was thin, whereas now I’m a little more rounded, but I like me as I am. Above all, he likes me as I am: isn’t that true, mi amor? (more kisses) My problem is that he’s brilliant in the kitchen, and I like eating.

E.S. My father had a restaurant and I helped him for years. Now I have a dream: I’d like to open a restaurant in Vienna.

A dish we can’t possibly miss?

E.S. My fish tartare with a sweet and sour sauce…. I cook in a healthy way, even if Anna complains that I make her put on weight… I love sitting down to eat with my family, and when Yara’s with us it’s perfect. I’m a very simple creature at heart.

Who gives in in an argument?

E.S. Me. I’m her soothing influence. She loses her patience easily.

The perfect man! So what are his defects Anna?

A.S. Mmmm… Shoes in the bedroom. In Russia you don’t enter a house wearing shoes!
E.S. In Uruguay we don’t have snow….

Anna, this is a fairy story. Does it have a happy ending?

And you, Erwin, what do you say Gracias alla vida for, as in your new cd Rojotango?

E.S. That disc is the soundtrack of my life. My father made sure I grew up with the tango and South American music, Astor Piazzolla, Pablo Ziegler. Each song has a dedication. Gracias a la vida is for my two children. The light of my life. And for Anna. Success is secondary.

the perfect man, the perfect couple… he abandoned his family only a few years after this upon learning tiago has autism. some father! some husband!

my best wishes to anna, yusif and tiago. and erwin…. my wishes to him are best left unsaid.