The Times asked writers to choose their favourite romantic film, and explain the reasons for that choice. This is drastically edited look at the list; to read in full go here:

If the joy of romance is contained in the contrast with the accompanying sadness, which it must be, then the essential romantic film is Brief Encounter. Adapted by David Lean from a Noël Coward play, no film of sweeter sorrow was ever made.

Matthew Parris on Whistle Down the Wind (1961)

As a boy I fell in love with Hayley Mills. Or, rather, I fell in love with Kathy, the part she played as a child actress in the film of her mother’s novel, Whistle Down the Wind. I fell in love a bit with Alan Bates, too, in this, his first film, playing the on-the-run murderer (hiding in a barn) whom a band of children mistake for Jesus, and try to protect from grown-ups and the police…

David Aaronovitch on To Have and Have Not (1944)

I was introduced to To Have and Have Not more than 30 years after it was released in 1944, by a gay girlfriend (a long story), who would burst into delighted, tickled giggles whenever its female lead came into view. Lauren Bacall was only 19, it was her first film, and she was about to begin a romance with her married co-star, Humphrey Bogart. And has there ever been a debut like it? The plot, based on an Ernest Hemingway novel, is gloriously beside the point, because the entire point is Bacall. The voice. The smile. The smoulder. The draping of herself across furniture and doorways. The cigarette lighting. The sheer bloody danger of her. Love on screen for gay girls and straight guys.

Anushka Asthana on Eternal Sunshine of the Spotless Mind (2004)

It is a melancholy story about a relationship that is at times dysfunctional. But it is also about second chances; about thinking twice before storming off after a vicious argument; about remembering that the elation of falling in love is all the more powerful when set against the pain of losing someone.

Love, for me, is comfortable and fun. Like a dressing gown with big pockets that have snacks in. That’s why my idea of romance is, say, the cartoon version of The Lion, the Witch & the Wardrobe… No shouting, no swooning, no suffering: just a lot of soft-furnishings and fur.

This love takes the froglike shape of Edward G. Robinson as Keyes the claims adjuster, workaholic and choleric, his cigar ash-flecked waistcoat hiding a fatherly heart that mentors young Walter and overrides his detective instinct…

… In my turbulent teens that emotional shock ending told me that, for all the craving for romantic love, the adult world and the most prosaic office could hold another kind. That there was glory in the bread-and-butter affection between colleagues, workmates and comrades. I saw that this love was real, too, and might even outlast the passionate kind. That consoled me. 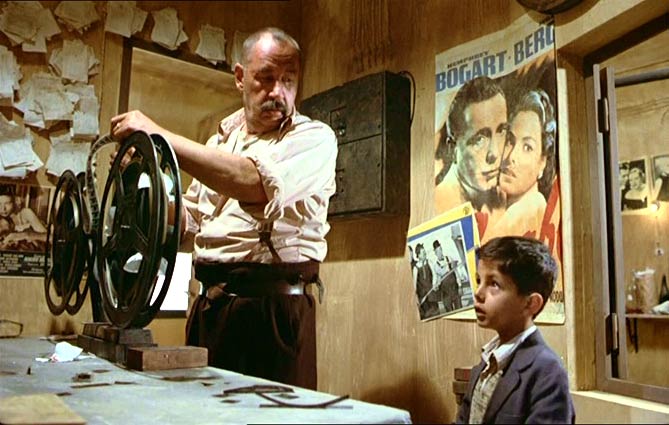 I’m not sure what my absolute favourite film is, but I know my top two: Cinema Paradiso (the standard version) and Cinema Paradiso (the director’s cut). They are very different; each is a masterpiece. Set around a movie theatre in a small Sicilian town in the 1950s, the film explores love in different forms. The emotional hook is a story of adolescent infatuation: will Salvatore get his girl? But that central love story runs alongside other expressions of love: a mother’s love for a son; a man’s love for his vocation; a mentor’s love for his apprentice.

This teen movie is painfully, sweetly, precise. A volatile millionairess called Nicole (Kirsten Dunst) falls for a penniless Latino, Carlos (Jay Hernandez). It’s a bit Romeo and Juliet, a bit Beverly Hills 90210. But when Dunst turns to Hernandez and says, “I think I’m in love with you,” you believe. She gets it just right. She’s been weird all night. Half-crying. Self-hating. And then it comes, with wobbly chin and plaintive eyes. As I get older, my affection forCrazy/Beautiful starts to become a bit Humbert Humbert, but the film retains its draw.

I Know Where I’m Going is a classic in which an ambitious, social- climbing young Englishwoman goes north to marry a rich industrialist on a Scottish island… The story is about throwing away preconceptions and national stereotypes, and just going for it, which I did.

I can see why several reviewers describe what happens next as a “doomed love affair”. Gresham dies. In many respects Shadowlandsis more romantic horror than romantic comedy. But this, surely, is what love is really about: putting your heart on the line, even if at the cost of deep personal pain. Or, as Jack puts it at the end of the film: “Why love, if losing hurts so much? … The pain now is part of the happiness then. That’s the deal.”

Sometime in the Nineties I was a teenager travelling through Vienna, not that much younger than the glamorous backpackers played by Ethan Hawke and Julie Delpy in Richard Linklater’s winsome two-hander…

… Hawke’s character is insufferable, but so self-conscious with it that you can’t hate him, not when he stumblingly tells Delpy that she’s a “Botticelli angel telling me everything is going to be OK.” The film is 16 years old, but it might as well be 116: today they would have skipped their day in Vienna, instead DM-ing each other on Twitter as their trains went in opposite directions. However modish and grungey Hawke and Delpy seem, I love them for being so old fashioned.

Falling in love is exquisitely, briefly, awful. For a short while, it’s like the colour and the sound has suddenly been switched on, up to 11. There is nothing to compare to it, but for me, a food obsessive, a safe, day-to-day hint of what love can do to a body and brain is tied up with taste. About a third of the way into this intoxicating, operatically over-the-top Italian drama, there is a food scene that literally takes my breath away. It’s the bit with the prawn.

Will Hodgkinson on The Mother and the Whore (1973)

It’s 1984. I’m 14 and I have been invited to the movies for the first time by a Boy. Excitingly, we’re heading into the big city. The picture is Walter “The Warriors” Hill’s Streets of Fire, which technically I am too young to watch. It’s a campy rock’n’roll thriller styled with a weird blend of 1950s nostalgia and dystopian futurism. And after 20 minutes I’m in love. Not with my date, despite his offer of a can of pop, but with the film’s star, Michael Paré. He wore a trench coat. He could kiss in slow motion in a backlit rain storm. He was chisel-jawed, brooding and irredeemably cheesy. And this is the tragedy of the thing: you only get one first movie-star crush and mine will forever be on a man who spent his early career clad in acid-washed denim.