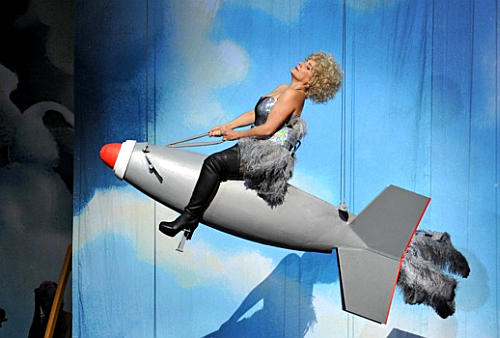 Cecilia Bartoli’s well thought out programming for her first year as director of Salzburg’s Whitsun Festival was thematic, inspired by the lady of the asp, Cleopatra. The climax of the festival was a new production of Handel’s Giulio Cesare in Egitto, with la Bartoli as the iconic Egyptian queen. The casting was superb and aurally everything was splendid, but the production was the biggest load of bosh I’ve seen in ages.

Directors Moshe Leiser and Patrice Caurier, faithful Bartoli collaborators from Zurich, have put together a production which is (presumably intentionally) anti-aesthetic. Fine. Let’s have scenery that looks as though stagehands have left bits lying around after a storeroom clearout; props, furniture and costumes that seem to have been chosen at random from a thrift shop; lighting which casts shadows haphazardly across the stage and cast. But Bartoli singing Piangerò la sorte mia with a bag over her head… NO! And were it not for the intensity of Anne Sofie von Otter’s Cornelia, it would have been truly comic as she finished Priva son d’ogni conforto with her head inside a plastic crocodile’s jaws. Masturbation is usually just silly onstage, and it strained credulity and was embarrassing to watch an otherwise excellent Christophe Dumaux rub himself up and down the bedclothes… and the list could go on… and on.

Bartoli’s costumes did her no favours either – she looked as if she was walking on her knees for much of the time – and when she was whisked off on a rocket engulfed in burlesque ostrich-feather fans another comic moment was only avoided by the need to applaud her exhilarating Tu la mia stella sei. But the excellent Philippe Jaroussky’s shorts and sandals as the son of Cornelia were intentionally amusing, von Otter’s bearing let her carry off her costumes elegantly, and Andreas Scholl’s military dictator garb was suitably naff.

As this is Bartoli’s baby, she should certainly take some of the blame for the visual outcome and, justly, she should take credit for the excellent vocal line-up, with an inspired Giovanni Antonini conducting the exciting Il Giardino Armonico. Scholl, who sings with care, has lost much of the heroic edge to his voice, though his perfect coloratura and heart-rending softer passages are magnificent. Younger counter-tenors Dumaux and Jaroussky have all the vigour required, and Dumaux’s mastery of the stage is impressive. Von Otter’s tone may be less burnished than years ago, but her intelligence and musicality easily make up for any vocal weaknesses.

This is, at the end, Bartoli’s show and the audience rewarded her with just applause. Her voice still has all the registers well-joined, with no apparent holes. Even the rich lower notes are part of the same voice which flies off into the soprano stratosphere. A remarkable achievement. But is is not just the miraculous technique or the unique timbre of the voice which makes her singing so special: her phrasing is rare and magical, and the extreme force of the passion that she puts behind each note and word, grabs the audience’s attention totally, enthralled by this splendid musical creature.

Moshe Leiser and Patrice Caurier and their production team were greeted by hearty boos.

With 96% of all tickets sold, and subscriptions up fourfold on last year, Bartoli’s Festival has been a successful one. The 2013 Whitsun Festival‘s theme is “opfer”: sacrifice, victim. Bartoli’s centrepiece will be a production of Norma with the same cast that was seen in Dortmund a couple of years ago, though that was in concert form. Antonini will conduct Bartoli as Norma, Rebeca Olvera as Adalgisa, John Osborn will sing Pollione, and Michele Pertusi, Oroveso. Moshe Leiser and Patrice Caurier will direct… fingers crossed!