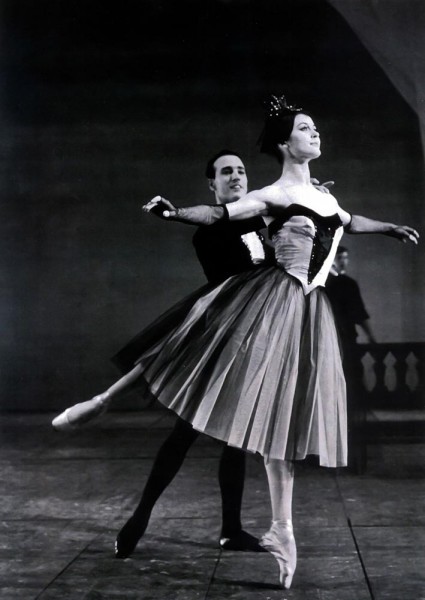 George Balanchine’s Bourrée Fantasque is a piece that comes in at under half-an-hour and one of the first works he created for the newly-formed New York City Ballet in 1949.

The ballet makes use of various compositions by Emmanuel Chabrier: Marche Joyeuse (1888); Prélude from the opera Gwendoline (1885), Fête Polonaise from the comic opera Le Roi Malgré Lui (The Reluctant King), and Bourrée Fantasque (1891) itself.

In 1961 the ballet was performed, under Balanchine’s supervision, at Teatro alla Scala in Milan, with the 24-year-old Carla Fracci who danced in the Prélude and the Fête Polonaise.

This large ballet is for 42 dancers and performed in four movements, with each of the first three sections having its own principal couple.

Here she is with La Scala dancer and teacher Walter Venditti during a difficult promenade where she is turned by her partner who pushes on just one shoulder.