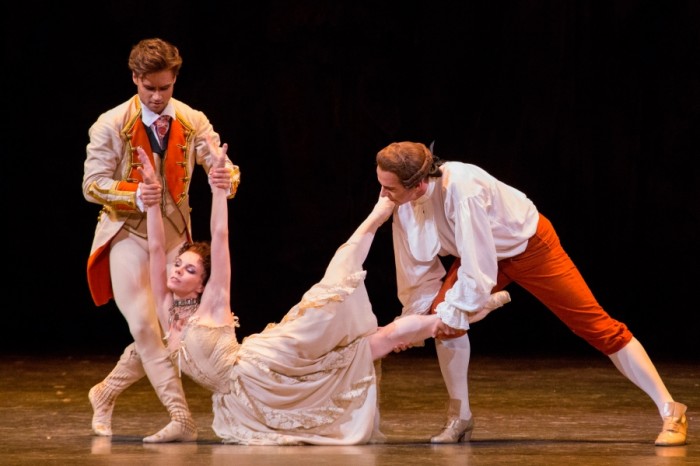 The applause that greeted Natalia Osipova’s return to the Bolshoi stage was enthusiastic.

The tour marks the Russian superstar’s first performances on the Bolshoi stage since her departure from the company three years ago, and if the breathless reception she got is any indication, she has been missed.

Osipova, now a Principal dancer with the Royal Ballet, has not been absent from her homeland because besides being a guest soloist of the American Ballet Theatre and at La Scala, she remains a guest at the Mikhailovsky Theatre. This September she will dance at the theatre a performance of Giselle with Leonid Sarafanov, and Swan Lake with a partner to be confirmed.

While in Moscow she expressed her wish that David Hallberg would be her Prince, who was originally slated to dance with her but his name has now disappeared from the publicity. Osipova said that without him it would be “meaningless”, but her manager – Ardani Artists’ Sergei Danilian – expressed confidence that it would go ahead with Hallberg.

Osipova’s Russian fans were happy to learn that she’d been in talks with the Bolshoi’s General Manager Vladimir Urin and the theatre’s Ballet Director Sergei Filin about a possible return to guest with the company, and she has provided them with a list a ballets she would like perform. However this will not be imminent as Danilian said that she didn’t have any free time in the foreseeable future.

Even so, the Moscow crowd were rewarded with her first ever performance of Manon with the Royal Ballet – she danced the role for the first time at La Scala in November 2013 – on the company’s last day of their stay at the Bolshoi. Cappelle reported that her performance was

…both entirely idiosyncratic and thoroughly compelling.

Osipova’s performance perfectly judged, it was poignant and naturalistic, yet the final pas de deux – with the fiendish double twist in the air after which she hangs like a limp rag in the arms of des Grieux – reveals her great technique.