The annual presentation of the latest additions to the series of books produced by the Amici della Scala (Friends of La Scala) is quite an event. It is held in the grand foyer on the first floor of Teatro alla Scala with the sovrintendente of the theatre, the unstoppable Anna Crespi who founded the association thirty years ago, and some of the biggest names in Milanese and Italian culture: theatre designers Ezio Frigerio, Luisa Spinatelli, Odette Nicoletti and Margherita Palli; dancers Carla Fracci and Luciana Savignano; directors Filippo Crivelli and Beppe Menegatti; actors Giulia Lazzarini and Ferruccio Soleri; baritone Renato Bruson, and, and, and…

Amici della Scala arranges conferences before each new opening at La Scala – a series known as Prima delle Prime (Before the Opening Nights) – which comments on and illustrates the titles in the theatre calendar. It has also been an important aid in cataloguing and preserving the 15,000 designs in La Scala’s archives. An off spin of this work has been to produce small, but detailed, books on various figures, including many set and costumes designers, who have collaborated with the theatre over its long history. These monographs are meticulously assembled by Vittoria Crespi Morbio, and there are almost 100 titles in the collection. The four new titles are on Lucio Fontana, Fabrizio Clerici, Odette Nicoletti and Margherita Palli. The four annual books trot ahead leading out the centrepiece full-size publication which this year is dedicated to the sumptuous designs of Lila de Nobili. 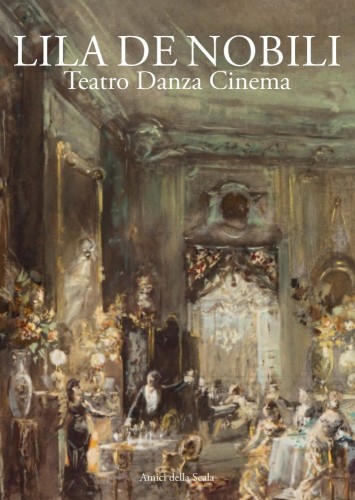 De Nobili was famous not only in Italy, especially for her work at La Scala, but in Paris where she worked for Vogue and she designed for the likes of Edith Piaf, Audrey Hepburn and Ingrid Bergman, and in Britain where she designed six Shakespeare productions for Peter Hall at Stratford-on-Avon, going on to work for Laurence Olivier at the National Theatre, and for productions at Covent Garden and Glyndebourne.

Her romantic style was perfectly suited to Frederick Ashton’s new ballet Ondine for the Royal Ballet in 1958 with Margot Fonteyn. She also designed the costumes for The Royal Ballet’s 1968 The Sleeping Beauty.

Some of her most celebrated work was for Milan, starting in 1955 when she designed the legendary La Traviata for Luchino Visconti with Maria Callas in the title role and Carlo Maria Giulini on the podium. A year later she designed Leonida Massine’s ballet Mario e il mago with Jean Babilée, then in 1958 for Franco Zeffirelli’s production of Mignon with Giulietta Simionato. A Falstaff came in 1961 with a cast which included Renata Scotto, Fiorenza Cossotto, Alfredo Kraus and Rolando Panerai.

De Nobili’s Aida with Zeffirelli in 1963 was such a success that has been regularly revived at La Scala, the last time just two years ago. The first cast included Leontyne Price, Cossotto, Carlo Bergonzi and Nicolai Ghiarov, with Gianandrea Gavazzeni in the pit. It was her last collaboration with the theatre.

In 1968 she designed Tony Richardson’s film The Charge of the Light Brigade with Trevor Howard and John Gielgud, but soon after became almost a recluse in Saint Germain. Visconti managed to tempt her out of retirement to design his Manon Lescaut at Spoleto, but then she disappeared from view pottering about with her paint-splashed slippers among her cats in her Paris loft. She died in 2002 at 85. On hearing of her passing Zeffirelli remarked,

She was the greatest scene and costume designer of the 20th Century, the teacher of us all. Every time I design an opera I think of her.

She influenced generations of artists including Robert Wilson, and David Hockney who painted her portrait.

One of de Nobili’s most noted disciples is Chloé Obolensky, someone whom de Nobili helped greatly during her formation as an artist and designer. Obolensky also happens to be the designer of Fidelio, the opera which opens La Scala’s 2014-2015 season on 7 December.

I must get this book. She was the most romantic of designers.