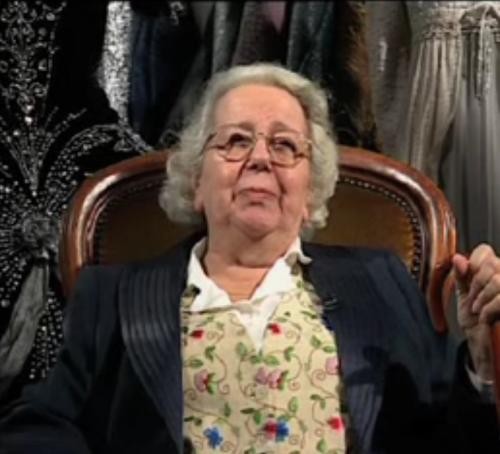 Eufemia Brancato died this morning three weeks before her 96th birthday. She was the head of Brancato Costumiers in Milan which she founded in 1961 after five years working at the Piccolo Teatro with Giorgio Strehler. Creating her own company came about after the great Italian designer Luciano Damiani asked her to make all the costumes for an opera he was designing. Being that she could hardly do such a thing at home, and didn’t want to turn down such an opportunity, she opened her first workshop.

She had an uncanny eye for detail and line, able to move a pin by a fraction thus making a beautiful costume into a great one. Her company made costumes for La Scala and theatres throughout the world exporting Italian knowhow and flair along with her own perfectionism. She was actively working in the workshops until well in to her eighties, and oversaw the running of the company even when she was confined to a wheelchair over the last few years.

Although the company made (and makes) costumes for opera and prose, it was especially sought out by designers for ballets as it specialised in making meticulous yet resistant costumes which were also practical for the very precise needs of dancers.

For them, the costume needs to be like a second skin: it can’t weigh them down and must fit perfectly.

Bancato had a steely eye, which could wither the most capricious of divas, and was exigent with her collaborators. When she was 84, she said,

I get angry if my workers don’t give me the chance to check over what they have done. I know that I’m always organising the lives of others, but what can I do if I realise before they do what needs to be done.

Italian stage designer Luisa Spinatelli, who worked with Brancato for a lifetime, commented this morning:

She was indispensable for finding technical solutions when making a costume. She was inventive and exceptional in helping to find the right material for the job. It is sad to think that many such specialised costumiers are closing and our nation is losing a valuable cultural heritage. Signora Brancato cannot be replaced.

She made all the costumes for me for Carla Fracci’s company. We had a wonderful working relationship taking her costumes made in Milan to companies all over the world. The Raymonda that we did in Japan with Svetlana Zakharova won the Kiko Takibana prize for best theatre costumes.

Other designers who opted for Brancato are Oscar-winner Franca Squarciapino and Margherita Palli.

The director Beppe Menegatti and his wife Carla Fracci collaborated many times with Brancato with both their own ballet company and with other productions where Menegatti was the director. This morning he told me,

Eufemia Brancato was the true leader of the tutu in Italy. Her handmade creations were the benchmark for excellence influencing how costumes are made in Europe.

I owe this exceptional woman gratitude not only for her work but for her generosity. We began our work together many years ago and it has been a long journey, which has always been characterised by excellence that has in turn had an effect on other productions.

Carla Fracci was dressed on hundreds of occasions by Eufemia Brancato and will miss her terribly.

The funeral will be held on Tuesday in Milan.