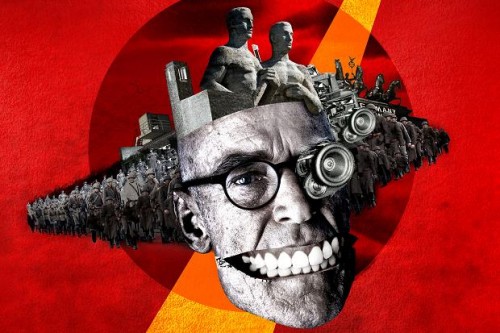 After months of complaining (by critics and audience) that too many famous film or television directors were being let loose on the ENO stage with often disastrous results, it seems that the latest in the line has come up trumps. The Times says,

That celebrated aphorism about monkeys, typewriters and the works of Shakespeare seems to apply at English National Opera too. Give enough film directors enough chances to direct opera for the first time, and sooner or later one of them will produce a staging that sears itself into the memory. I think Terry Gilliam has just done that.

For him, The Damnation of Faust becomes “the damnation of Germany”. I don’t know why — because Berlioz, its composer, was French; and Goethe, its author, was born 150 years before Hitler. And presumably nobody had told Gilliam that filling innocent Romantic masterpieces with goose-stepping Nazis has become the biggest cliché in modern opera production.

But thank goodness they didn’t, because Gilliam pursues his theme with a theatrical verve, inventiveness, stamina and single-mindedness that belies his inexperience in this field. What’s more, the often manic, futuristic music fits so well that you wonder whether the composer himself had premonitions of what horrors awaited humanity.

The Guardian, too, loved the concept:

What Gilliam comes up with is by turns breathtakingly imaginative and horrifyingly vivid, whether it’s the Hungarian March serving as a backdrop to the outbreak of world war one, Faust’s seduction of Marguerite while Kristallnacht is taking place outside her window, Marguerite’s final scene awaiting the train that will take her to a concentration camp, or Faust and Mephistopheles’s ride to the abyss in motorbike and sidecar.

No punches are pulled, the use of video is perfectly judged, and everything on stage has a musical as well as visual purpose.

Gilliam’s direction of the singers, whether en masse or individually, is detailed and precise too.

David Nice for the Arts Desk was stunned by the last scene:

Perhaps I won’t spoil the impact of the final image, for once, but I suspect it will stun future houses into a more awed silence than the first night’s noisy media-circus crowd. Suffice it to say that I never thought Berlioz’s usually saccharine apotheosis could be anything but a disappointment. This “in paradisum” sung by a never-better ENO chorus and children’s voices as a crowd of reverent onlookers giving some hope for a better future proves me wrong. Go and judge for yourselves whether this is an ENO risk that has paid off; I’ll hopefully be returning to confirm a hunch that it has.

Richard Morrison in The Times concludes,

Gilliam’s found the ideal medium for his imagination.

Image: ENO’s publicity for Gilliam’s The Damnation of Faust