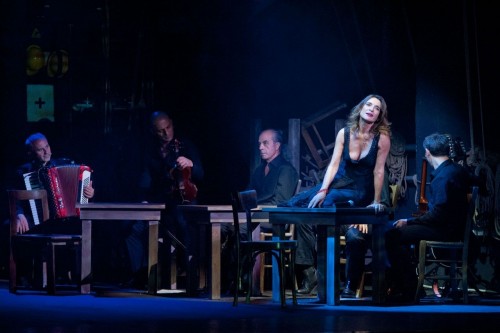 Lina Sastri performs Neapolitan songs like no other. She is sexy, she is sultry, she is sad. She’ll leap up on to a table and make primeval hip movements as though participating in some tribal dance, then she’ll jump down and kick her bare feet in the air like an overjoyed street urchin. Her voice is strident and raw: a cry of pain, longing, ecstasy; but she’ll reign it in to the most intimate of sounds: simple, melancholic, romantic.

As one of Italy’s most accomplished actresses she finds every possible nuance in these most beautiful and passionate of songs. Some, so well known from the Little Italy spaghetti ‘n’ pizza stereotype, come as a revelation after receiving the Sastri treatment.

In Linapolina – Lina at the beginning, Lina at the end, and Napoli right at the centre – she mixes her own monologues and poems, much of it autobiographical. On stage there is a mix of tables and chairs, and an open doorway through which video projections show the moon, the sun and – fundamental for Napoli – the sea. The onstage percussionist conjures up its sound with a rainstick. He is one of eight excellent musicians who sit around the tables playing with Sastri the singer, or interacting with Sastri the actress, and even moving with Sastri the dancer. An accordion and a mandolin give a Neapolitan flavour, though the arrangements are sometimes surprising veering from a jazzy feel to a primitive – and highly intense – beating of drums.

This is a show that should tour the world, demonstrating how these songs can be sung. Neapolitan life laid bare, with all its ups and downs, joy and heartbreak. The mixed crowd – VIPs, grannies, young couples, gays, politicians, businessmen – at Milan’s Teatro Manzoni showed, with their ecstatic applause, how universal these songs are, even if they come from a southern land so far removed, both physically and mentally, from Italy’s north.

Lina Sastri is a giant talent, with a seductive personality, and a sharp wit. If her language was English she’d be selling millions of cds, in all corners of the globe. Among her discography is Lina Sastri: Live on Broadway and Lina Sastri: Live in Japan but the majority of her work is, of course, in her homeland. But I urge you to hunt out her recordings and video clips – and even the DVDs of her film and television work – for there is a wealth of ‘Sastrian’ emotion waiting to be discovered.