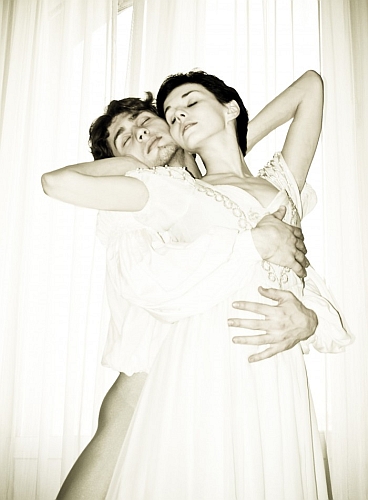 Certainly not-to-be-missed, the blurb from the ENO site announces the London performances of Romeo and Juliet with Ivan Vasiliev and Natalia Osipova:

A triumph in London last summer, Vasiliev is being hailed as the ‘new Nureyev’, and is one of the most talented of a new generation of male dancers. The premiere of Ashton’s Romeo & Juliet, is the chance to see Vasiliev’s first appearance in the role of Romeo with Natalia Osipova as Juliet, the extraordinary dancer the New York Times is calling ‘the most sensational ballerina now’.

Founder choreographer of the Royal Ballet, Sir Frederick Ashton’s, version of Romeo and Juliet, set to the iconic Prokofiev score, is given a fresh revival by Danish dance legend, Peter Schaufuss. If you are a ballet lover, dance lover or theatrical culture vulture, this is a stand-out event not to be missed.

But poor Vasiliev the “new Nureyev”! Such a comment might be at home in a News of the World piece, but on the English National Opera site it looks out of place. Angela Gheorghiu was the new Callas (she wasn’t); Vittorio Grigolo is the new Pavarotti (he isn’t); and so many new Fonteyns have come and gone… I might be wrong but I’m guessing that Vasiliev and Osipova are simply “Vasiliev and Osipova”.

Performances run from the July 11 – 17 at the London Coliseum.