You are here: Home / dance / Dmitrichenko pleads not guilty in the first day of Bolshoi acid attack case 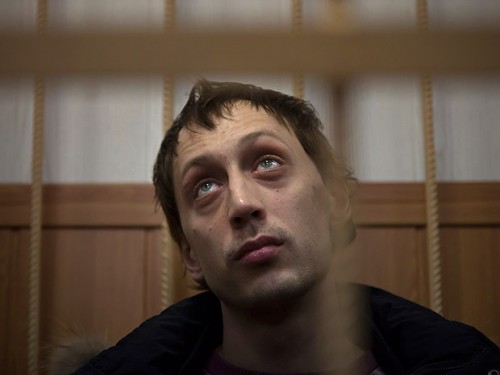 The first full hearing in the case of the acid attack on artistic director of the Bolshoi Ballet, Sergei Filin, was held in Moscow today, reported Izvestia.

The defendants arrived with guards who were without masks. Last week Bolshoi soloist Pavel Dmitrichenko, who is accused of instigating the crime, claimed to have been beaten-up by masked guards after the preliminary court hearing. Sergei Filin was not present as he is undergoing further treatment in Germany for his eyesight.

The criminal investigators believe that Dmitrichenko “entered into a criminal conspiracy with Yuri Zarutsky and Andrey Lipatov, aiming at intentionally inflicting grievous bodily harm on Filin”. They state that the motive was his discontentment with the way Filin was running the Bolshoi Ballet with the “assignment of roles, and distribution of fees, among the artists of the company”.

In contrary to what Dmitrichenko had originally claimed was an offhand comment, taken seriously by the two who carried out the attack, the investigators said it was premeditated.

In order to implement the plan Pavel Dmitrichenko… no later than 12 October 2012 purchased mobile phones and SIM cards. On the evening of 12 October all three defendants inspected the future crime scene. On 22 November Zarutsky bought battery fluid which, on an unknown date before 16 January, was evaporated to produce sulfuric acid, and poured into a glass jar.

Dmitrichenko said that he didn’t collude with Zarutsky or Lipatov, and that he did not purchase phones and SIM cards registered to non-existent people. He admitted that he had recounted to Zarutsky his feelings about Filin, but says that he was unaware of Zarutsy’s criminal record.

Court documents seem to show that there is evidence that Filin had intimate relationships with a number of the young dancers of the company, and Olga Smirnova’s name, among others, was mentioned. Dmitrichenko said that he hoped these documents could be used in the case to underline the immorality of Sergei Filin.

The trial is set to continue on 31 October.

Whether Serge Fillin had relations with dancers or not, does not justify the misplaced rationale behind hurting him (or in this case, allegedly having others hurt him). Whatever moral impropriety that may have occurred, to turn the trial around to undermine Mr. Fillin will not undo the fact that he was attacked. Diverting the attention from the real issue seems to show that there may be very little to support the innocence of Mr. Dmitrichenko. This will all end up as a movie with everyone profiting in the end. There will, undoubtably, be further ugliness to ricochet from this story.

I know little about the law, but this would seem to be Dmitrichenko’s motive for instigating this crime, yet he pleaded ‘not’ guilty. Isn’t he here just saying that Filin mad him mad because of favouritism toward ballerinas that he had an ‘intimate’ relationship with, thus denying his own girlfriend the roles she deserved. It seems a strange line of defence.

Dmitrichenko’s way of self defense by spreading gossips about a highly respectable young lady is disgusting!