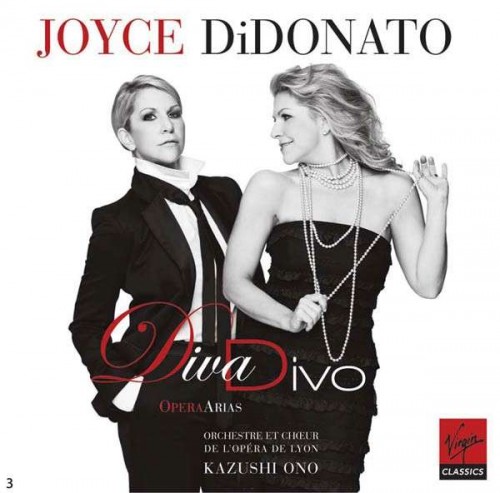 As the blurb succinctly puts it, “This new collection showcases DiDonato’s multi-faceted art – and the wealth of opportunities open to a mezzo-soprano – by presenting her as different characters, both male and female, from the same opera or from different musical treatments of the same story.”

Here’s what DiDonato herself has to say:

This recital celebrates the vast and fabulous world of the mezzo-soprano. Aside from the obvious Toscas or Cio-Cio Sans, I’ve never regretted the length of my vocal cords! I have the privilege and unmitigated joy of playing boys and young men, as well as girls and grown women … It’s an exploration of the human palette of emotions.

“I wanted to find a way to show this duality on disc, while highlighting some of the composers I’m most passionate about, such as Mozart, Bellini, Berlioz, Rossini, and Massenet. In exploring this idea, the possibility became clear for telling different sides of some of the most familiar tales which have served as inspiration for operatic legends: Cinderella, Faust, Romeo and Juliet … I’ve always thought of myself as a storyteller, and with this particular disc, I can showcase that side of me as never before. I’m ready to play!”

And others are ready to listen, like Andrew Clark for the Financial Times:

She is a consummate professional, ranging with ease from Mozart and Massenet (Cendrillon and Chérubin) to Strauss’s Composer (Ariadne auf Naxos) and Gluck’s Sesto from La Clemenza di Tito: if only she would champion this shamefully neglected opera in the theatre.”

Fiona Maddocks in The Observer is enthusiastic too:

It’s playful, as well as an ideal vehicle for her glorious mezzo voice in which the most fiendish coloratura ornaments and trills sound effortless.”

From literally the first note – an ecstatic F sharp over an arresting harmony (the submediant in A major), which launches ‘Je suis gris!’ (‘I am tipsy’) from Massenet’sChérubin – this disc is a joy.”