You are here: Home / dance / Critics round-up: Sylvie Guillem at Sadler’s Wells – “Dancers have a cruelly curt use-by date. They’re better fresh. Or are they?” 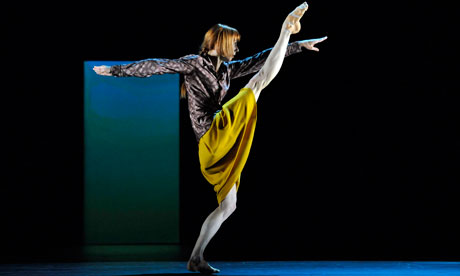 She’s done it again, and everyone’s delighted that Guillem still has the possibility to enchant, astonish and all those other adjectives that the press have been hurling around in the last 24 hours. Here’s a selection:

At 46, Sylvie Guillem may have abandoned her former ballerina roles, but she is still one of the most astonishing dancers on stage today. Even though the youthful gloss has gone from her performance, along with the provocative glamour, her latest project confirms that the intelligence of her dancing burns even brighter. The Guardian

Whatever Sylvie Guillem is taking, I want some of it. Has there ever been a ballerina more determined to inhale the elixir of youth? Her latest excursion at Sadler’s Wells, where she is an associate artist, sees her dancing like someone half her age (she’s 46) yet delivering the kind of commitment that only mature artistry can bring.  The Times

There’s a lot to say about Sylvie Guillem’s new show, but the flair and virtuosity of her dancing stops you in your tracks.

Despite the very considerable charisma of fellow dancer Nicolas Le Riche, you can’t take your eyes off Guillem who, astonishingly, turned 46 this year yet is as physically assured as dancers half her age. And rather than perform easy-does-it choreography, the French ballerina performed new work by Mats Ek and William Forsythe that would challenge much younger dancers. Evening Standard

Sylvie Guillem is back, chicken-skinny, middle-aged, dressed like a dowd. Did I just write that? And let’s add: as swift as mercury, as exact as a feather, as light as the sun, and as eternal in intelligent beauty as Nefertiti. In contemporary dance it should be permissible to sit in the dark wondering at the inexplicable and the unbelievable. This great ballerina of our era is both inexplicable and unbelievable, in physique and in temperament. Not least incredible is that a Parisienne of 46 would allow herself to appear in two outfits that compete effortlessly for Fright of the Year. The Arts Desk

When Sylvie Guillem takes endless bows at the end of this evening of newly commissioned work, her smile is wide and full of pleasure. Quite right, too. This scintillating bill is the result of her intelligence, skill and passionate engagement with the art of dance…

…But it is Guillem’s night, a confirmation if any were needed that she is, quite simply, unlike any other dancer there has ever been. The Telegraph

In 1987, William Forsythe created the lead role of In the Middle, Somewhat Elevated for the young Guillem. Still his best-known mainstream work, its explosive, slamming steps showed off her spectacular technique. The new Rearray is much calmer, but still highlights her cool intelligence.

Guillem and the Paris Opéra Ballet’s Nicolas Le Riche twist through mercurial changes of direction. Movement starts in a curving arm, wriggles through the torso, then breaks off as the legs do something completely different. It’s a cerebral, detached work; the dancers follow their own trains of thought, in no hurry to go anywhere in particular, the starry cast giving it extra force. Their movements are brilliantly articulate, a fluid Le Riche against the more nervy, electric Guillem. The Independent

Ms. Guillem’s long, flexible limbs and torso, her ability to coordinate complex cascades of motion and her luminous physical intelligence make her a lightning rod for Mr. Forsythe’s choreographic desires, a pure incarnation of idea and intention transmuted into poetic form. In his new “Rearray” Ms. Guillem dances with a favorite partner, the Paris Opera étoile Nicolas Le Riche; they are both enthralling in this delicate, spare duet.

Set to an atonal score by David Morrow, the piece begins with Ms. Guillem and Mr. Le Riche standing apart on a bare stage, facing the audience. It’s a more austere version of the opening of “In the Middle,” and the very first step of “Rearray” echoes the first movement of that ballet, as Ms. Guillem turns a knee inward, then outward, sweeping one arm into a curve overhead. The New York Times

Her movements are stereotypical: now puppet-like, now crazily purposeful. She may be a frustrated suburban matron; she may be that archetypal Ek heroine, the long-term, institutionalised mental patient. At intervals, she seems to recall a childhood dream of dancing, and launches into a sensuously high kick or snappy turn. More than once, she balances on her head. The piece is touching, but too self-consciously whimsical to be truly poignant. Unlike the figure of Guillem herself. There’s that extraordinary body, with its racy, sinewy lines. And the face, touched with the knowledge that one day, all of this will have to end. But not yet. The Observer

Lean as a whip, subtle as a snake, there is nobody – and no body – on the dance stage as fascinating as Sylvie Guillem. Now 46, she may have relinquished the classical roles that made her name, but her sideways step into contemporary work has seen no diminishing of her powers, not one jot. The Independent on Sunday

What is a diva to do when time begins to nibble at her bones? Sylvie Guillem, 46, still looks as sleek and fierce as in her ballet prime, but she has long been aware that dancers have a cruelly curt use-by date. They’re better fresh.

Or are they? …Guillem premieres two pieces by grand men of European modern dance — Mats Ek and William Forsythe, both of whom she has worked with extensively. If she’s a muse to them, she’s also a challenge: it’s an immensely rewarding evening. The Sunday Times

And because not everyone thinks the same, here’s the wonderful opening to The Sunday Express’ review:

She must be joking. One of the most gifted dancers the world has ever seen, French-born Sylvie Guillem, last week performed two world premieres of such mediocrity it was hard to distinguish between them. My pen remained poised for lengthy intervals waiting for something to happen during William Forsythe’s Rearray, when Guillem was partnered by Paris Opera Ballet étoile Nicolas Le Riche, and when she danced on her own in Mats Ek’s Bye. The main attraction should have been the joy of a great dancer dancing, but I waited in vain. The Sunday Express