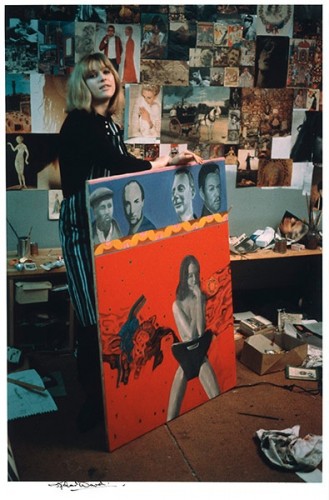 On display at the National Portrait Gallery, London, from 30 April until 15 September 2013 is a free exhibition to mark the passing of half-a-century since the Profumo Affair scandal.

The British political scandal came to a head in 1963 and was named after John Profumo, the then Secretary of State for War. Profumo (married to the actress Valerie Hobson) had a brief affair with the nightclub hostess and model Christine Keeler who was also romantically involved with the senior Russian naval attaché Yevgeny Ivanov. The infamous affair took place against the backdrop of the Cold War and heightened political paranoia. The display features a rare vintage print of one of Lewis Morley’s iconic seated nude portraits of Christine Keeler as well as Stephen Ward’s pastel of her, made at Cliveden. Images of the other protagonists in the Profumo Affair are portrayed through photographs, magazines and ephemera from the period.

Scandal ’63 was the title given to one of the many books published about the Profumo Affair at the time, and is also the title of a Pop Art work by Pauline Boty that incorporated Lewis Morley’s iconic photograph of a naked Christine Keeler. The painting features four of the key players: John Profumo, Keeler’s friend, artist and osteopath to the establishment, Stephen Ward; Keeler’s former lover the jazz promoter Johnny Edgecombe and his rival the jazz musician Aloysius ‘Lucky’ Gordon.

There are also a number of contemporary press photographs of those involved, including Keeler’s friends Mandy Rice-Davies and Paula Hamilton-Marshall, which describe the unravelling of the story in the media. Satirical comments on the scandal are represented by Gerald Scarfe’s cartoon of Harold Macmillan as Keeler appearing in Private Eye and an LP cover for That Affair featuring an illustration by Barry Fantoni.

The humiliation and distrust of the establishment at the height of the Cold War led to the end of Harold Macmillan’s tenure as Conservative Prime Minister and the election of Harold Wilson’s Labour Government in 1964.