You are here: Home / dance / La Scala’s fired ballerina, and eating-disorder author, Mary Garret on her first year back with the company

In 2016, Mary Garret walked through the artists’ entrance at La Scala, ready to take daily class again with the company that had fired her four years previously.

The ballerina Mariafrancesca Garritano, who writes under the name of Garret, wrote a book where she reflected on the nature of stringent diets and the search for the perfect physical form. La verità, vi prego, sulla danza! (The Truth, Please, About Ballet), made waves internationally. Gramilano reported the story back in December 2011.

On 4 December 2011, three days before the prestigious opening of La Scala’s Opera and Ballet Season, Garret told the Observer,

When I was training as a teenager, the instructors would call me ‘mozzarella’ and ‘Chinese dumpling’ in front of everyone… I reduced my eating so much that my period stopped for a year and a half when I was 16 and 17, and I dropped to 43 kilos [6.8 stone].

I would get by on an apple and a yoghurt a day, relying on adrenaline to make it through rehearsal.

I still get serious intestinal pains and frequent bone fractures, which I think are linked to dieting.

About speaking out about her experiences, she added,

The chance of getting fired has crossed my mind, but I love La Scala, I care about it, and that’s why I really hope things can change.

She did get fired.

At the beginning of the following year the theatre dismissed her stating their just cause as libel, as she “described a situation that she knew didn’t correspond to the truth and in doing so damaged the theatre’s reputation”. 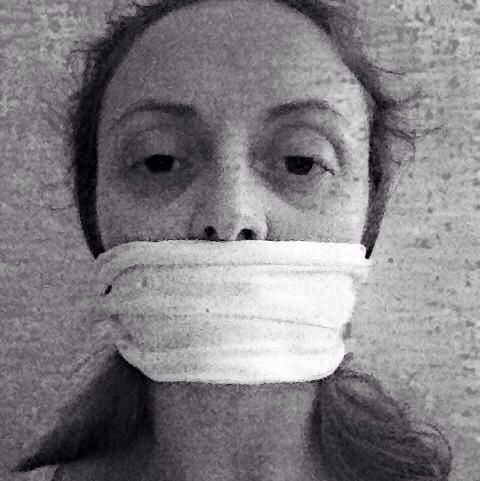 Garret posted a powerful image on social media, illustrating how her voice had been silenced. Though thousands leapt to her defence on Facebook, several ballet professionals spoke out against her, including Paris Opera Ballet étoile Eleonora Abbagnato who said that nothing of what Garret had said was true.

Carlo Maria Cella, then head of the press office, said that she had come through the theatre’s school fifteen years previously, and that it no longer corresponded with current practice. Garret said at the time,

I talk to people coming through the system and it seems nothing has changed.

Garret appealed against the decision, but two years later, in February 2012, the court sustained La Scala’s position. At 35, she was without a job and, frankly, who is looking to hire dancers who, in ballet terms, are middle-aged.

Garret is feisty, both on and off stage, and she said,

The time waiting for the legal decision is over, now it is time for the truth and I intend to pursue this to the very end. I may have lost my job, but not my dignity.

She may have been thinking about writing and campaigning further about eating disorders in the ballet world, but her lawyers urged her to appeal, which she did, but in 2014 the decision was upheld. Garret continued with her battle and — showing that under the white tulle are not just a tough bodies but often an iron willpowers too — she resolved to take her case to Italy’s Supreme Court, the country’s highest court of appeal, known also as ‘the court of last resort’.

In April of last year, it returned a verdict in her favour, and Garret had the right to return to her job at La Scala. After a little more than four years she could go back to doing what she loved.

What was it like walking into La Scala again?

I was totally scared. It was like the first day of the school, when you are a child… you know what I mean?

Were there colleagues who were not pleased to see you back?

Well, many people were new to me… though as I’m writing about my experience returning to the company, I don’t want to give too much away!

Garret is someone you notice on stage. She has a lively personality and La Scala has admirably not kept her in the corps out of spite.

I’m happy to study Hermia just right now, and I hope to perform this role [the casting has been announced, and she will be Hermia for some performances], and the “Butterfly” too, in A Midsummer Night’s Dream, which is the next ballet we dance at La Scala. They were the first roles I danced when this production was created for the company.

That was back in 2003. Who would have thought then, that her career would feature a four-year gap. Does she have any regrets for writing the book?

Why should I? My book was sold in La Scala’s Shop. It is out of production now only because of the end of the contract with the first publisher, but I’m still looking to produce a new edition, and I hope I’ll find a way.

Everything in the book is just about me and my experience in the ballet industry. It’s personal. And I can say that even after all that has happened, I still have the dreams that I started with.

I really missed the stage with a live orchestra. It was hard. I will write about this too. Four years is a lot of time for a professional dancer of that age: I was 33 at the time.

Fortunately, during all this “waiting time” I had Michele Villanova, the former principal dancer at La Scala, who asked me to dance with my brother Massimo, a professional guitarist, on stage together. It was fantastic, a little like being at La Scala, when you can see the conductor and the orchestra… feeling live music in your heart.

The drive to keep on training, with just occasional shows, and with no certainty of ever being able to return to the company, is admirable. Villanova was her coach during those years.

You know, I’m happy to dance again but nobody can give me back the time I lost… that’s hard.

I wrote about her in my Ballerina: Sex, Scandal and Suffering Behind the Symbol of Perfection book. So glad to get the update: all hail this ballerina activist!

Mary Garret I’d be honoured. It is on Amazon and elsewhere