You are here: Home / dance / Photos: Baryshnikov and Dafoe in Robert Wilson’s The Old Woman 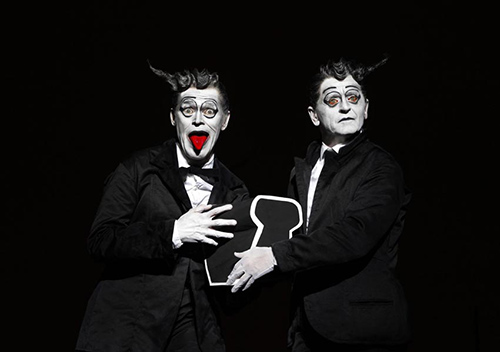 Robert Wilson’s new creation, The Old Woman, opens at the Manchester International Festival tonight. Mikhail Baryshnikov and Willem Dafoe star. The Independent‘s Sarah Crompton went to Spoleto where the rehearsals took place to talk to the great dancer, who happens to love rehearsing:

I respect process more than I actually like to perform. When you start to perform, it starts the gipsy life. Days are not the same. You wake up in the morning and the nerves are starting. I don’t like that. I love it when I am performing but I don’t like those nerves. But at the rehearsals, I am totally at home.

Rudi [Nureyev] went dancing on and on, he wanted to be on stage, every day, no matter what.

He is objective about his dancing,

I was a bad partner. I was not strong, I was small. I had a great time dancing with Natalia Markarova and Gelsey Kirkland – that kept me going the last few years on the classical scene – but they were partnered much better by other people.

And on dancing in Nureyev’s Raymonda?

I didn’t like his choreography. It was too busy.

Robert Wilson is known for the precision in his work from the movement to the lighting.

Perfection is unachievable, it’s like a golf game. But as long as there is light in the window you can just try to dream about some next step, or how to make the this day better, or how to be more interesting today than yesterday.

The Old Woman is at the Spoleto Festival in Italy from 12-14 July.