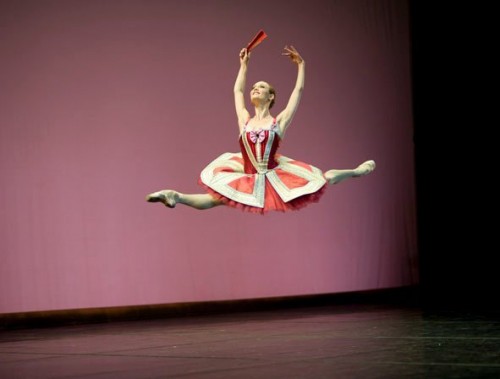 When did you start dancing?
I’ve been dancing since I remember; ballet school at 9.

Why did you start dancing?
I started with ballroom dancing, then hip-hop and a bit of break dance… one thing led to another and I happened to enter ballet school.

Which dancer inspired you most as a child?
Natalia Makarova; Gelsey Kirkland.

Which dancer do you most admire?
Sylvie Guillem.

What role have you never played but would like to?
Marguerite Gautier from The Lady of the Camellias, Tatiana in Onegin, and Manon.

What’s your favourite ballet to watch?
It could be any story ballet if it is danced by a true artist. In general I don’t go to watch ballet to see a “ballet performance”. I go to watch an artist performing it and bringing something special out of any performance, whether it’s a classical full-length or new work.

Who is your favourite choreographer?
Kenneth MacMillan and John Cranko for the simplicity and depth they have created in ballets, and David Dawson for taking ballet to another level and giving dancers a possibility to go beyond their abilities and look fierce.

Who is your favourite writer?
I don’t have a particular one, although I very much like Russian writers of the 19th century.

Who is your favourite director?
Woody Allen.

Who is your favourite actor?
Meryl Streep; Jack Nicholson.

What is your favourite book?
A Thousand Splendid Suns by Khaled Hosseini.

What is your favourite film?
The Godfather.

Which is your favourite city?
London; New York.

What do you like most about yourself?
Inner strength and willpower.

What do you dislike about yourself?
I usually suffer from being honest… I wish I could learn to sometimes be  “correct” instead of “honest”.

What was your proudest moment?
To become a mother.

When and where were you happiest?
Every morning: waking up with my husband by my side and seeing my son’s smile when he wakes up. And on stage where I feel I can let go and lose myself completely.

What or who is the greatest love of your life?
My family.

What is your greatest fear?
Losing people I love.

If you could change one thing about yourself, what would it be?
That’s not for everyone to know!

What do you consider your greatest achievement?
To be where I am under the conditions I have had.

What is your most treasured possession?
Honesty and love.

What is your greatest extravagance?
I like quality in everything.

What do you consider the most overrated virtue?
Faith.

On what occasion do you lie?
I try to not lie & that usually gets me in trouble .

If you hadn’t been a dancer what would you have liked to be?
An actress or a surgeon.

What is your most marked characteristic?
Willpower and stubbornness.

What quality do you most value in a friend?
Honesty.

What quality do you most value in a colleague?
Respect.

Which historical figure do you most admire?
Margaret Thatcher.

Which living person do you most admire?
My best friend.

What do you most dislike?
When people lie to my face and think that I don’t know the truth.

What’s your idea of perfect happiness?
To be grateful for what we have.

How would you like to die?
Quickly. But  after I tell my loved ones how much I love them.

What is your motto?
Do your absolute best or don’t do it at all.

Jurgita Dronina was born in Russia in 1986, and graduated from the ballet department at the National M. K. Čiurlionis School of Art in Vilnius, Lithuania, and also studied at the Munich International Ballet School, under the directorship Konstanze Vernon.

Jurgita has participated in International Ballet Competitions winning Gold at the IBC in Grasse in 2003; Silver in Helsinki in 2005, Silver in Moscow in 2005, and Silver in Jackson in 2006.

Various prizes include the Rotary International award (2008); Swedish-Danish cultural Grant (2009); 1st, 2nd and 4th  International ballet Festival ‘Dance Open’ in St Petersburg in 2010, 2011 and 2013; and European Dance Magazine “Dance Europe” voted her Outstanding Dancer of the season in 2009-10, 2010-11 and 2011-12 for interpretations in MacMillan’s Romeo and Juliet, Kitri, Aurora, and the Tchaikovsky Pas De Deux.

Jurgita is such a stunning dancer, what quality she brings to everything she does. Thanks for this opportunity to peek at the person beneath the tutu!