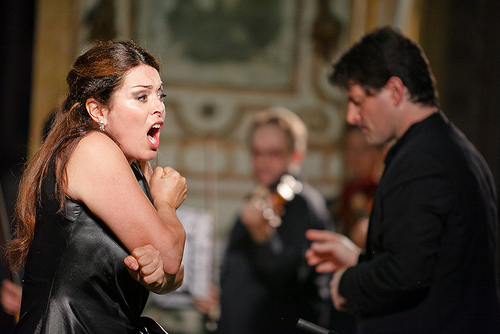 It may be a cliché, but Anna Caterina Antonacci has, like a fine Italian wine, got better with time.

Twenty years ago she was floundering with vocal problems, and it was probably this that gave her a nervy stage presence. She took time off, trained hard, and climbed her way back to the top. Her perfect technique lets her pass from Carmen to an intricate programme of Baroque music with apparent ease. Antonacci now projects a calmness as she sings, secure in herself, and comfortable doing what she loves.

Her abilities as an actress have always been outstanding, but the confidence that she now has in front of an audience leads to an even more convincing performance. Yesterday evening, in Milan’s Chiesa Sant’Angelo, Antonacci was simply stunning.

After the Accademia degli Astrusi‘s opening concerto by Corelli, Antonacci, who at 50 has two shoulders to rival an Olympic swimmer, strode out and took her place under the illuminated crucifix way above her head. Even with the problems of a slightly foggy acoustic, she proceeded to give the most touching account of the fiendishly difficult “Lagrime mie” by Barbara Strozzi, and “A dio Roma” from Claudio Monteverdi’s L’Incoronazione di Poppea.

But her best was to come. In perfect English she sung what must be the saddest peice of music ever written, Dido’s Lament from Purcell’s Dido and Aeneas. The notoriously problematic ‘remember me’ is only just above the stave, a modest G (sol), yet it has tripped up some of the it’s greatest interpreters. It sat beautifully within Antonacci’s voice and the effect was extraordinarily emotional.

The last vocal piece was Monteverdi’s Combattimento di Tancredi e Clorinda (see photo) — a 25 minute dramatic scene which can be interminable without an actress guiding you through story. Antonacci’s clear diction and measured gestures communicated every nuance of Monteverdi’s masterpiece. Her un-showy intensity drew the audience into the emotion of the scene resulting in one of those magical pauses, after the last note has died away, when no one wants to break the spell.

Federico Ferri conducted with verve, and the orchestra played well in an acoustic which presented some difficulty. They lack the dynamism and fiery eye-contact which makes groups such a Les Arts Florissants so magical to watch as well as hear, but their rendition of Francesco Geminiani’s concerto grosso, La Follia, was magnificent.