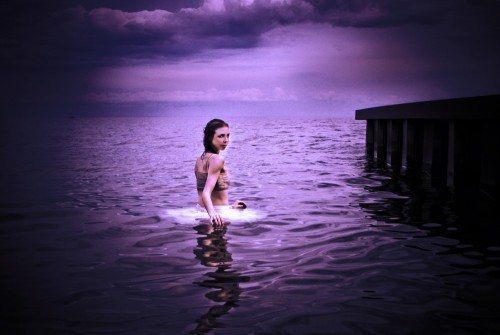 When did you start dancing?
When I was 7 years old.

Why did you start dancing?
I was part of the free lunch program at school and my sister and I got a flyer about a ballet school audition called Dance: The Next Generation. It was aimed at underprivileged children to give us a goal and focus. Because my mother was a dancer when she was younger, she sent both of us to the audition and we were accepted. I became obsessed with it immediately.

Which dancer inspired you most as a child?
I had a video of Suzanne Farrell dancing Tzigane that I watched almost every day when I was little. Suzanne was captivating and the music was amazing.

Which dancer do you most admire?
Evelyn Hart.

What role have you never played but would like to?
Juliet.

What’s your favourite ballet to watch?
Anything by John Neumeier.

Who is your favourite choreographer?
Again, it has to be John Neumeier. But I also love Wayne Mcgregor.

Who is your favourite writer?
Eckhart Tolle.

Who is your favourite theatre or cinema director?
Martin Scorsese.

Who is your favourite actor?
Daniel Day Lewis.

What is your favourite book?
Eckhart Tolles A New Earth.

What is your favourite film?
Film wise it depends on what mood I’m in. I love The Aviator, Wolf of Wall Street, and Great Expectations… I really enjoy documentaries too.

Which is your favourite city?
Rome is my favourite because there is beauty and history everywhere you look. It feels magical. I was invited to dance in Rome with Italian choreographer Krstian Cellini. The second time I went, I travelled to Pisa to dance in a performance for Andrea Bocelli and Placido Domingo. Italy in general is unbelievably beautiful. I find the people so inviting and warm hearted.

What do you like most about yourself?
It’s hard to talk about myself in that way… so I guess my humility.

What do you dislike about yourself?
That I can be too impatient and stubborn.

What was your proudest moment?
2 and a half years ago I developed an illness that stopped me from dancing. I couldn’t even walk so I didn’t think I would ever be able to dance again. During the very long and painful year I was sick I met my now husband and was taken care of by a team of amazing medical specialists. I slowly gained my strength back and started to take class again. I’m proud of myself for getting through such a dark time and fighting my way back to dance again. Now I’m healthy and stronger for having had that experience.

When and where were you happiest?
My wedding day here in London.

What or who is the greatest love of your life?
My mom, my dad, my husband, my cat and ballet… hard to chose just one.

What is your greatest fear?
Something bad happening to my loved ones.

If you could change one thing about yourself, what would it be?
I wish I was better at keeping in touch with my friends and family that live far away.

What do you consider your greatest achievement?
Being able to dancing again even when the odds were against me.

What is your most treasured possession?
My sister Rachel passed away in 2010. I have home videos of when we were young and they mean the world to me.

What is your greatest extravagance?
I don’t consider myself very extravagant at all. But I do like to sleep in when I can.

What do you consider the most overrated virtue?
Perceived beauty.

On what occasion do you lie?
I’m a terrible liar so I would rather tell the truth.

If you hadn’t been a dancer what would you have liked to be?
I always liked the idea of being a counsellor.

What is your most marked characteristic?
My husband is sitting here saying I’m loving, kooky and determined… so I’ll go with that.

What quality do you most value in a friend?
Friends that aren’t judgemental and care for you unconditionally.

What quality do you most value in a colleague?
Someone who is supportive, positive and has a good sense of humour.

Which historical figure do you most admire?
Marie Curie, the first woman to win the Nobel Prize for her work in science.

Which living person do you most admire?
Evelyn Hart.

What do you most dislike?
A big ego.

What talent would you most like to have?
I wish I could play a musical instrument really well.

What’s your idea of perfect happiness?
I moved away from home when I was 14 and have a hard time getting home as much as I’d like. I would be happiest to be with my family and in laws all in the same place preferably on a beautiful beach!

How would you like to die?
Quick and painlessly.

What is your motto?
I love this quote by Tom Hiddleston… “Never, ever let anyone tell you what you can and can’t do. Prove the cynics wrong. Pity them for they have no imagination. The sky is the limit. Your sky. Your limit. Now. Let’s dance.”

Bridgett Zehr was born and raised in Sarasota, Florida.  She began her training with the Sarasota Ballet’s innovative Dance: The Next Generation programme.  She continued her studies at The Harid Conservatory in Florida under a scholarship from the Rudolf Nureyev Foundation , and finished her training at Houston Ballet’s Ben Stevenson Academy. In 2002, she was a finalist in the International Ballet Competition in Shanghai.

In 2003 Zehr joined Houston Ballet . Her repertoire includes Odette/Odile in Swan Lake, Calliope in Apollo, the lead roles in Gloria, Suite en Blanc, Western Symphony, La Valse, the Snow Queen and The Sugar Plum Fairy in Ben Stevenson’s The Nutcracker. She also appeared in Theme and Variations, and In the middle, somewhat elevated.

In 2006 Karen Kain invited Zehr to join The National Ballet of Canada as Second Soloist in September 2006 and she was promoted to First Soloist in June 2007 and Principal dancer in June 2009.

Zehr has danced the title role in Peter Wright’s Giselle, Odette Odille in Swan Lake, The Sugar Plum Fairy in The Nutcracker, Cinderella in Cinderella by James Kudelka, Aurora, Principal Fairy and the Diamond Variation in Rudolf Nureyev’s Sleeping Beauty, Olga in John Cranko’s Onegin, the female lead role in Glen Tetley’s Voluntaries, Façade Pas de Deux in Glass Pieces and the first movement of In The Night by Jerome Robbins, McMillan’s Song of the Earth, fourth movement principal in Symphony in C, and First Movement and Choleric in The Four Temperaments and The Waltz Girl in Serenade by George Balanchine.

In August 2010 Zehr joined the English National Ballet as a Principal Dancer under  the directorship of Wayne Eagling. Her repertoire includes Gershwin, choreographed by Derek Deane. In this ballet she danced the pas de deux’s The Man I Love and An American and the principal ballerina in Rhapsody in Blue. In December 2010, Zehr danced the Sugar Plum Fairy in Wayne Eagling’s The Nutcracker. She danced the main pas de deux in Petit Mort by Jiří Kylián and also appeared on national television for the 50th Anniversary of the Queen’s Coronation performing the ballet Tempest, by George Williamson.

Bridgett Zehr has appeared in many gala performances, such as Gala des Etoiles in Montreal, Gala of International Ballet Stars, Cincinnati, the Miami International Ballet Festival, Stars of 21st Century Gala in Toronto and The International Ballet Star Gala in Taipei and Singapore. She was invited by Christopher Wheeldon to create Prokofiev Pas De Deux for the world première of his company Morphoses.  In 2009, Sarasota Ballet’s artistic director Iain Webb invited Zehr to dance with the Sarasota Ballet of Florida in addition to establishing the Bridgett Zehr scholarship fund. She was a principal guest artist with the company for the 2010-2011 season.

In 2014 Zehr was invited to Pisa, Italy, by choreographer Kristian Cellini. She danced a pas de deux for the Andrea Bocelli and Placido Domingo “Pathos” performance.

Keep up to date with Bridgett via her website: bridgettzehr.com