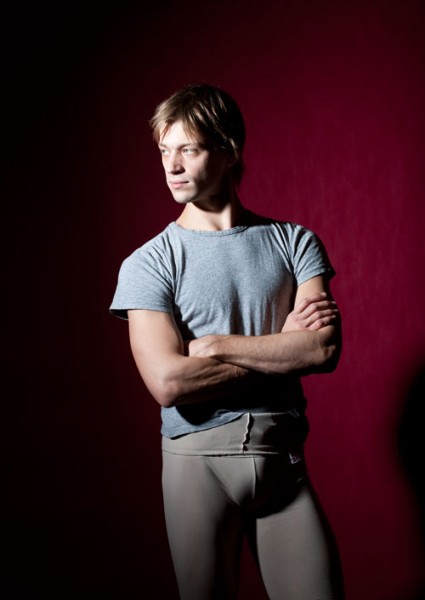 The Times talked to Rupert Pennefather on the eve of his 30th birthday and his début in Manon:

Never underestimate the importance of looking good in white tights – says Debra Craine – for a male ballet dancer it’s a crucial part of the job description.

Which is no problem for the tall, well-proportioned Pennefather. As Craine sums up, “Be it one of the 19th century’s many princes or one of the 20th century’s tragic heroes, Pennefather is the quintessential romantic leading man.”

He’s also a shy and unassuming young man, something that may aid or hinder his career… who knows. Here he reflects on dancing, dyslexia and being tall

Pennefather on his looks:

People tell me that I suit the prince roles, that I have a certain stance or something. It’s nice to hear that and it’s very encouraging, it means I don’t have to panic about playing a prince. But I don’t think about myself when I’m on stage, or about how I look, especially with all the makeup they put me in. Gorgeous? I certainly don’t feel it.

I feel a responsibility as an English dancer, but I also don’t want to let the standard drop because there have been such great English dancers here: Anthony Dowell, Jonathan Cope, Bruce Sansom. So yes, there is a pressure not to let audiences down, but I enjoy that pressure.

On dancing Des Grieux in Manon:

It is the role I have always wanted to do. Manon scares me because it has such controlled solos and the pas de deux are quite tricky, but it’s scary and exciting. Des Grieux is such a good part, though it feels scary to be doing it on my birthday. No champagne breakfast for me, that’s for sure. I really enjoy dancing with Sarah [Lamb, also making her début]. I feel very comfortable working with her. Physically we are well matched and I think she will be really good in the role.

I’m upset about being 30 only because a male dancer’s career generally finishes in his thirties. In your twenties you feel as if you have all the time in the world; in your thirties suddenly it’s a countdown. The back starts to go, the arabesque goes. But I have a large amount of repertoire under my belt, I have learnt many roles, so now I can give more time to the artistic side of things. I can work on perhaps lightening up on stage, which I have been told I need to do, and not looking so moody. So in my thirties I will try to develop my roles and have some fun on stage.

On the Royal Ballet School:

The ballet teachers were quite enthusiastic and quite supportive, but the academic side of things was always a problem for me. It was a struggle because I am dyslexic and found it very difficult to concentrate and there wasn’t the support that there is now for dyslexic kids. Even now it takes me a very long time to read anything. There are certain techniques you can do to help yourself, so I can read but it takes me a lot longer than other people.

I also developed more slowly as a dancer because I think it takes taller boys a bit longer for it all to click together. Smaller boys have more control and more awareness of their bodies; taller boys are gangly and a bit weak, at least that’s what I found. It took a year of private coaching for me to feel like I was getting anywhere.

Pennefather photographed by Tim Cross for the Dancing Times